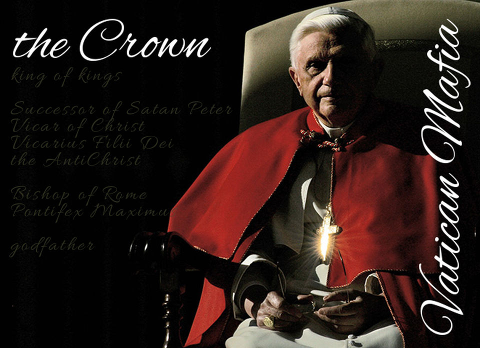 Contrary to what you’ve been intentionally & fraudulently lead to believe, the Crown does not represent the government of Canada, nor the illegitimate German (Saxe-Cobourg & Gotha) Catholic (married Roman Catholic Hitler Youth schooled Philip Battenberg) Queen of England,  Canada and the Commonwealth..  The Crown represents the “corporate entity” of the  Pope; self-proclaimed king of kings. For all intents and purposes, the Crown represents the Vatican Mafia and its “criminal” activities in Canada, the UK and the illegally established 1871 Crown Corporation UNITED STATES (10 square miles District of Columbia).

The Crown ceased to represent the UK and Canadian monarchy when Queen Victoria forfeited the Protestant England throne by marrying her “German” first cousin, “Roman Catholic” First Reich Prince Albert Saxe-Coburg and Gotha.
Immediately upon Queen Victoria illegally marrying a Roman Catholic, violating the Act of Settlement of 1701 law and her coronation oath, Pope Pius IX assumed control of the German monarchy of England, Canada and the Commonwealth and the Bank of England.  On Jan 1, 1855 the Bank of England became a Crown (Pope) Corporation called the “City of London Corporation”.
All Crown Corporations are illegally assumed (via racketeering) “corporate” assets of the Pope, who assumed the title “the Crown” (king of kings) during the First Vatican Council.

Since Queen Victoria’s illegal Roman Catholic marriage, Edward VII, George V, Edward VIII, George VI, Elizabeth II, the UK and Canadian Prime Ministers and Premiers, the President(s) of the 1871 est UNITED STATES (10 sq miles District of Columbia), UK, Canadian and US Supreme Court judges, the Secret Service (SS), the RCMP, the UK, Canadian and US Armed Forces, CSIS, MI5, MI6, the CIA, DHS, IRS, CRA, all betray their country, the rule of law and even their faith, as they all purposely and consciously serve a foreign state and head of state. the “Roman” Catholic Pope.
Because Vatican City is a foreign state & the Crown is the Pope, not the Queen, the Prime Minister(s) & all Crown judges and RCMP (1867 est. “military force” that serves the Crown, not Canada) members are guilty of treason and high treason, Section 46 of the Criminal Code of Canada.  They and any Canadian who serves or served the foreign head of state and our WWI and WWII enemy, the Crown, are traitors – betrayed his or her own country, Canada; aided and abetted our enemy.
Canadian Forces enlisted and RCMP officers are all guilty of high treason and treason against Canada because of the fact that they serve as an armed “military force” for a foreign head of state, the Crown. Their oath of allegiance may be to the illegitimate (forfeited the throne when she married a Roman Catholic and became leader of  the “Order of the Garter” a Roman Catholic military order) Queen of Canada but they do not serve her.  According to Section 36 of the Crown Liability and Proceedings Act under “Agencies and Servants of the Crown“
36. For the purposes of determining liability in any proceedings by or against the Crown, a person who was at any time a member of the Canadian Forces or of the Royal Canadian Mounted Police shall be deemed to have been at that time a servant of the Crown.

Any and all police/security forces member in Canada who bear the Crown symbol on their uniform as part of an insignia and/or badge, are also guilty of high treason and treason against Canada.  The Crown identifies servants of the foreign head of state, the Crown.

High treason
(1) Every one commits high treason who, in Canada,
(b) levies war against Canada or does any act preparatory thereto; or
(c) assists an enemy (Vatican Second, Third and Fourth Reich) at war with Canada, or any armed forces (Vatican Nazi/NATO forces) against whom Canadian Forces are engaged in hostilities, whether or not a state of war exists between Canada and the country whose forces they are.
Treason
(2) Every one commits treason who, in Canada,
(a) uses force or violence for the purpose of overthrowing the government (exists to secure the rights of the people and must be based on the consent of the governed) of Canada or a province;
(b) without lawful authority, communicates or makes available to an agent of a state other than Canada, military or scientific information or any sketch, plan, model, article, note or document of a military or scientific character that he knows or ought to know may be used by that state for a purpose prejudicial to the safety or defense of Canada;
(c) conspires with any person to commit high treason or to do anything mentioned in paragraph (a);
(d) forms an intention to do anything that is high treason or that is mentioned in paragraph (a) and manifests that intention by an overt act; or
(e) conspires with any person to do anything mentioned in paragraph (b) or forms an intention to do anything mentioned in paragraph (b) and manifests that intention by an overt act.”
The Catholic Church illegally imposed a latifundia (Mafia) system of governing and justice system in Canada, the United States of America and England after the Catholic Chuch arranged the marriage of Queen Victoria to her first counsin (incest) and Catholic Church First Reich Prince Albert Saxe-Coburg and Gotha (violation of England’s monarchy laws).
The Vatican Mafia was formed by the Egyptian sun god trinity – Isis Horus Seb (IHS) worshiping Jesuits (descendants of the Knights Templar) to illicitly acquire wealth and property for the Pope.
Since Queen Victoria’s unlawful marriage to Roman Catholic First Reich Prince Albert, the Pope, not Jews, has been illegally acquiring wealth via Catholic Church owned Crown Corporations and by taxing the Canadian, USA and UK people under false pretense, false representation and color of law.
The Catholic Church would have you and I believe that the Crown represents the reigning King or Queen of Canada and the UK when in fact the Crown represents the Pope’s color of law (not law, pretense of law) established temporal authority. The Crown is the “corporate entity” of the reigning Pope, not the Anglo-Saxon monarchy.
The exact date on which the Catholic Church Pope assumed control of Canada, the USA and the UK was Jan 1, 1855. That is the day Pope Pius IX unlawfully seized control of Bank of England by converting the Bank of England into a Vatican Mafia Crown Corporation called the “City of London Corporation”. Before Jan 1, 1855 the reigning Anglo-Saxon “Protestant” monarchy owned and controlled the Bank of England.
From Jan 1, 1855 to present day the Catholic Church Pope has unlawfully taken over and assumed control over the “Protestant” UK monarchy, the UK, Canada and the United States of America through the illicit monetary theft and taxation via the Pope’s Crown Corporation (Vatican Mafia) City of London Corporation.
“He who controls the money supply of a nation controls the nation.” – James A. Garfield
Since Jan 1, 1855, the Catholic Church Pope (the Crown) has unlawfully assumed control the UK, Canada and the United States of America governments and judiciary system (all judges, persecution and defense lawyers, RCMP in Canada) by controlling the Bank of England (Crown Corporation “City of London Corporation”) under false pretense, false representation and color of law/right.Short URL: http://presscore.ca/?p=10855