It is desirous of The Anishinabe Nations of The Great Turtle Islands to maintain harmonious relations within our borders.

The entity of CANADA is a Guest on Our Land, CANADA is registered as CORPORATE CANADA in USA. All politicians and government officials and courts and people in CANADA swear allegiance to “THE QUEEN’.

While the motivation of CANADA  – The Crown in Cultural Genocide of The Original People and maintaining the Apartheid state, is obvious, Turtle Island is immensely rich in resources and resource wealth, we caution Her Highness Queen Elizabeth II, that to maintains the Apartheid control of her Defacto Colonial Empire on Anishinabe Nations Land of Turtle Island by legal deceit and trickery, the current control of the resources are through her Corporation, Canada is TRADED in the US Stock Exchange and registered as are OTHER “ex-colonies”. CORPORATE CANADA in USA. This is Canada’s corporate registered number is 0000230098 CANADA DC SIC: 8880 American Depository Receipt. Business Address Canadian Embassy 1746 Massachusetts Ave., NW, Washington, DC 20036.

By the Authority granted by The Sovereign Kitchi-Ostew-Kaneekanagoshick-Okimow-Wacon-Kaneekaneet Of The Sovereign Anishinabe Nation Of Turtle Island, I remain Ararita Plenipotentiary Embassador and Permanent Representative of The Nations of The Great Turtle Island. 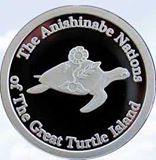