Canada Day celebrations across the country, but CANADA has not paid The Anishinabe Government of Turtle Island the Rent For 150 YEARS!

While we are thankful the Tenants are Happy Celebrating CANADA DAY, however 150 years of CANADA NOT PAYING THE RENTAL CONTRACT IS LONG ENOUGH.  CANADA is responsible to maintain the agreements of the Kings and Queens of England who maintained relationships with the Sovran Nations of The Great Turtle Island and were charged with maintaining Trust Accounts for payments of the Lease and Rental payments due the The People of The Great Turtle Island, as Trustees for The Consolidated Indian Revenue Fund also known a The Consolidated Fund.

A hundred and fifty years is a Long Time to wait for tenants to pay the rent. The SEC CORPORATION CANADA – THE USA  SEC CORPORATION –  0000230098 CANADA DC SIC: 8880 American Depository Receipt. IS CANADA , we wonder if the Shareholders of CANADA ever intends on paying.

Under SEC Rules, CANADA MUST MAKE FULL DISCLOSURE, this disclosure MUST include the final admonition that all CANADIAN GOVERNMENT ACTS ARE ULTRA VIRES.

TRUSTEE TO ACT, PERFORM, OPERATE, PROCEED AND FULFILL IT’S OBLIGATION AS TRUSTEE OF THE TRUST.

We also caution CANADA, under the Doctrine of ESTOPPEL, to immediately CEASE AND DESIST  making any ULTRA VIRES CONTRACTS WITH OTHER NATIONS AND COUNTRIES, contracts FOR or on INDIGENOUS LAND INCLUDING BUT NOT LIMITED TO THE RESOURCES, AND ESPECIALLY OUR PEOPLE.

Resources. Institutionalizing Indigenous People, are no longer to be used in any Court in CANADA. The Government of Turtle Island is the Highest Court on The Great Turtle Island. We did not give CANADA permission to Bond, Jail or Incarcerate Indigenous on The Land Of Turtle Island. Turtle Island wants to have all the Stolen Historical Artifacts and Documents returned to The Anishinabe Nation Archive.

By the Authority granted by The Sovereign Kitchi-Ostew-Kaneekanagoshick-Okimow-Wacon-Kaneekaneet Of The Sovereign Anishinabe Nation Of Turtle Island, I remain Ararita Plenipotentiary Embassador and Permanent Representative of The Nations of The Great Turtle Island. 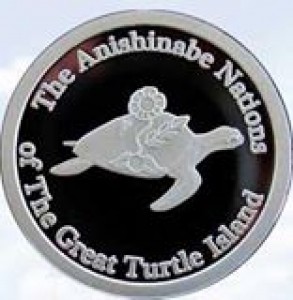